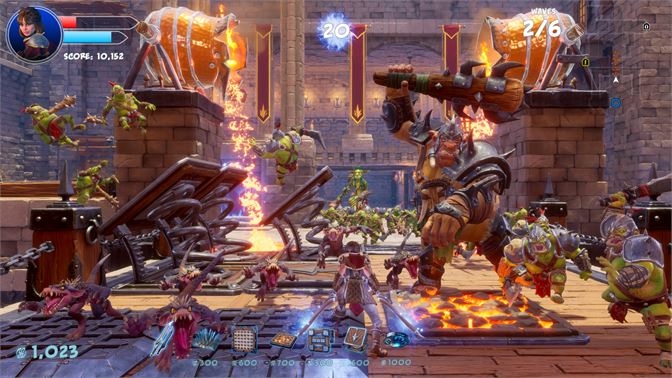 For many, Orcs Must Die! 3 will be thought of as just another modern day action-tower defense throwaway. It’s a game that attempted to reignite the genre on Google Stadia before moving over to mainstream consoles, once the initial appeal of Google’s game streaming failed to properly take off.

But dismissing what Robot Entertainment have created with this third title in the Orcs Must Die! franchise would be wrong, because this is in fact a hugely accomplished trap-dropping tower defense title; one that verges on deserving a place in 2021’s must-play list.

The setup and gameplay is what you would expect to find in an orc smasher. Some high fantasy narrative and story plays out in the background, introducing players to the main protagonists of the action, hinting at what has gone on before it in previous games. This is seen as a direct sequel to Orcs 2, but honestly, across both the opening Old Friends campaign and then into the unlockable Drastic Steps second stage, that story can easily be pushed aside. For it’s the gameplay that takes centre stage, providing players with some of the finest defensive rumblings they would have seen for a good few years.

We’re not overegging how great the fast and frantic, utterly smooth gameplay of Orcs 3 is; it really is so good that through our time with the game we’ve hardly been left wanting. The basic premise has you taking charge of a singular hero – although multiplayer options are also present – before being given time to survey the scene, understand the area you are in, and plan any Orc-destroying strategy and tactics that will need to be delivered for success, dropping down the traps in your armoury in hope that they’ll do the job intended of them.

The main campaign is a deep one, some 18 levels in length, accompanied by the Drastic Steps second offering alongside it. Each of the stages are also split up into multiple waves and whilst the opening throes of each are tricky to navigate, once you start getting traps in place and working out the route your foes will take, each stage slowly gets easier. Well, as easy as can be when each round throws more and more opponents into the mix.

Sprinkled into the campaign are some further grander scale War Scenarios, introducing players to new ideas and larger levels. For us, these break up the flow too much and the new level-specific War Machine equipment that is thrown out is barely worth using – mostly as it’s too expensive to properly utilise. Sticking with the tried and trusted methods that revolve around Spike Traps, Arrow Walls, Gravity Pillars and Guardian Archers is enough to see you through the majority of what Orcs Must Die! 3 has. If you want to go deeper though, Acid Geysers, Boom Barrels, Ceiling Pounders and more – Orcs 3 runs some 60+ trap, trinket and weapon types – are all viable options.

Success in Orcs 3 comes in the form of saving your Rift from oncomers (mostly Orcs but occasionally other wannabe rift takers), batting them back the best you can. For each attacker who finds their way into your Rift, a single point is lost. Lose all points and you’ll forever find failure. It’s here where placement of traps is key, but this is no standard tower defense title from years gone by and the ‘action’ moniker that is attached to it allows for you to take direct control of your defenders, utilising melee and ranged combat too. You’ll need to as well, as the traps alone will not be sufficient to push back the Orc hordes.

Of course, your hero comes with a health bar and mana bar attached, and so keeping an eye on these levels is critical to success. But similarly, traps can only be placed if you can afford them, with in-game coinage picked up for each and every death you dish out, building your bankroll and allowing for further trap placement. Selling gear when it’s not required (or you’ve realised it’s been placed incorrectly) recoups some cash too.

Complete a stage and you’ll be rewarded with Skulls, which in turn can be used to buy new equipment for future levels. The amount of Skulls you’ll gather up for each level is dictated by how well you’ve guarded your Rift – just manage to scrape through and expect a lower reward than if your tactical calls work from the get-go. In order to nail the big 5/5 Skulls, expect to have to drop back into each stage time and time again, tweaking your strategies as you go. There’s a serious amount of replayability found in what Robot Entertainment have created and due to the fact that all levels can be tackled in a variety of ways, there’s rarely the feel of any grind.

With a multitude of trap types and upgrades possible, alongside specific buffs for those traps which can be switched on and off at will, again nothing is left aside in Orcs 3. But that said, it doesn’t take long to find a system that works for you and once fully upgraded you’ll rarely want, or need, to make use of other trap and equipment types. There’s also a pretty tight limit on the upgrades of each item, typically maxing out after just a few upgrades. It would have been great to see these limits doubled at the very least.

One much appreciated aspect of Orcs Must Die! 3 is that no matter what game mode you are playing, and no matter whether you are popping in for a brief session or going deep into the career, unlocks and Skull currency are integrated as one. This means that should you find yourself struggling to get past a specific campaign stage and don’t wish to lower the difficulty (and you will get stuck, as the curve ramps up considerably around the midway point) it’s perfectly acceptable to jump into different game modes to earn some additional Skulls and be given the chance to upgrade your gear.

In place alongside those campaigns are three further options: Endless, Scramble and Weekly Challenges. The former and latter of these pretty much do as you would expect, delivering Endless waves for you to go up against, along with some developer-set Challenges which are pushed out with a variety of specific rules attached.

But it’s Scramble that may well be of interest to many. This provides you random tools, with a variety of buffs and debuffs attached; it’s these which make Orcs 3 a bit more of a challenge. Split into tiers, you’ll need to bring your A-game to the table in order to find success here, hoping for the best in terms of the randomly rolled enhancements that you get gifted. Taking on re-rolls in the hope that things may get easier doesn’t always go to plan either.

Orcs Must Die! 3 also allows for multiplayer options, and it’s a cinch to invite friends in via the online cooperative modes that are present. Whether you are using them to help in your quest to complete the Campaign, or need their skills to deliver you to higher Endless waves, the online multiplayer is pretty much perfect. Admittedly there have been a couple of slight niggles in respect of being able to select weaponry on occasions when two players are present, but a swift reset of the game has seen that fixed and shouldn’t really be too much of a concern.

Visually and Orcs Must Die! 3 is brilliant. Utilising a cartoony style that delivers high detail, character definition is of the utmost quality, from the standard grunts that mostly make their way towards you, to those that come armoured, set up with magic or full of ranged equipment. The mini boss foes are delightful too; as delightful as huge lumbering beasts intent on taking you and your Rift down can be.

It’s a similar story in terms of the player characters and with 6 heroes fully unlockable and playable, you’ll never be left wanting with what is on offer.

In fact, everything included here has been designed well. The huge variety of maps all come with the need for different tactical takes, with some seeing our Orc friends making the most of different paths (placing barricades is essential to keep them moving the routes you want them to take), whilst others are more linear affairs, sometimes spread over many floors as the waves slowly work towards you. They feel pretty different and that is no more true of the larger War Scenario additions.

And thankfully whatever you need done, Orcs 3 allows for it. We’ve been massively impressed by the ease of the control scheme, how simple it is to bring up a map overview so that danger can be spotted, and how easy it is to place a plethora of traps. It’s all plain sailing really and whilst you’ll occasionally be met with incorrect errors that won’t let you place a specific trap in a valid position, these rectify themselves swiftly.

In fact, aside from the fact that some of the stages are just a little too long – multiple waves of the deeper, grander War Scenarios can occasionally drag on – the only real negative to talk about in terms of Orcs 3 is that of the audio.

You see, for the most part it is just fine as traps creak into life and perished souls scream in pain. But should any of the Orc army get near your Rift, a constant overarching voiceover sticks on repeat, covering similar lines each and every time a foe is close. This would be okay should there only be the odd one or two getting near, but a single playthrough of Orcs will have you killing tens of thousands of enemies and so the repetition of this audio is pretty grating.

Audio repetition aside, Orcs Must Die! 3 is a little gem. The campaign modes are deep and varied, the weekly challenges are full of variety and both the Endless and Scramble options mix up the gameplay just enough to warrant some time with each. Throw in the simple to set up online multiplayer and you’ve got an extremely accomplished action tower defense brawler that the vast majority of gamers will thoroughly enjoy.

It’s just a shame it’s taken so long for these Orcs to break free from the shackles of Google Stadia exclusivity.

Face the orc hordes on Orcs Must Die! 3, playable on Xbox Series X|S and Xbox One