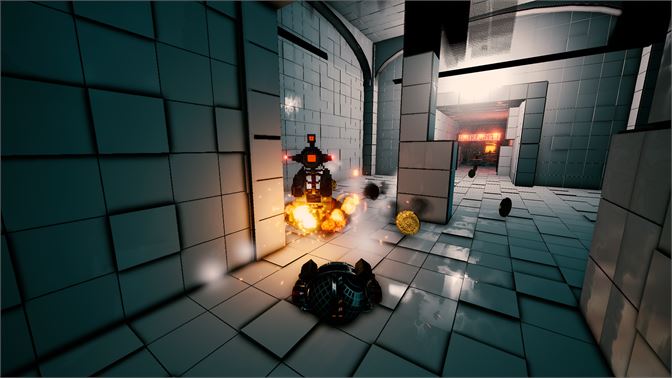 There can be something about a title that grabs your attention and makes you want to know more. Gears of War had that appeal the first time we heard it, as did the greatly named The Last of Us. But with The Last Rolling Hero, I had so many questions. What is a rolling hero? Why is it the last one? What the hell is this game? Normally these things are answered as you play through the experience. Here though we’re not so sure; in fact, we know pretty little – even after finishing it.

There is a sort of story in The Last Rolling Hero and so if you are sitting comfortably, then I’ll begin. In the faraway future, cute toy robots live on a distant planet. But behind their fun facade lies an incredible AI computing power. It’s here where evil robot forces use this power to create chaos in the universe and it’s up to you – as a cute robot on a spinning ball –  to save the universe and destroy all the enemies. There is some further dialogue found in the crazy cutscenes, which we will talk about later, but The Last Rolling Hero pretty much goes along the lines of the above. The story isn’t important though because harnessing the power of your robot is what this game is all about.

The Last Rolling Hero is a bit of a cross between the likes of Marble Madness and every arcade shooter you can ever think of. You start the game on a planet in a big-ish bit of area. Here you can see your little cute toy robot in 3rd person. Your job is to get to the other side of the level, drop into a teleporter and get the hell outta there – collecting some tokens, rescuing toy robot friends and trying not to plummet to your death.

It’s all straightforward stuff and you’ll find that you can move your robot around in the normal way, jumping a fair old distance with speed. The jumping is key in fact, as in most of the levels the whole experience focuses more on the Marble Madness vibe in terms of the gameplay. This means you get to move along very tight platforms, accurately jumping, landing perfectly. Thankfully though the mechanics for this work very well and this is a lot more forgiving than other games that have the same influence. It gets trickier as you go and in the latter moments the stakes get higher as you have traps to get through too – you know, stuff like lasers moving left to right or huge spiked traps swinging across your pathway. You’ll never find too much trouble though, easily jumping through the levels.

The other mechanic at play though is that of the shooting; you can continuously shoot lasers from your cute robot at the enemies. Most enemies spawn as a trio but as you progress and the faster you move through the levels you could be fighting loads of baddies at the same time. It’s really only here when The Last Rolling Hero ever gets a little more difficult. Move and shoot is the key to survival, letting you fight another day. There are some minor aiming issues but apart from that, it works fine.

There are 18 levels in all yet none will take you a huge amount of time to get through, although you can add a little extra depending on whether you want to collect tokens or rescue all your friends for full completion and achievements. After four levels or so you get to meet a huge boss robot too. This pits you against a super mech who you have to take down while avoiding the hordes of normal enemies that keep spawning.

The Last Rolling Hero has quite a basic graphical set but it does come with some nice lighting. But that said, the camera can be a nightmare in the cutscenes; zooming around and ducking in and out like a warzone news report. I don’t think it is particularly meant to be like this and if you look at it too long there’s a chance nausea will hit. It’s pretty buggy too – there was a time when the camera accidentally went inside the robot itself so all I could see was a tiny window of the level. You do however have to take into account that this is a small indie game and these issues are very much reflected in the very cheap price. It’s similar for the soundtrack – it’s okay with some nice, trippy beats and relaxing tones.

The Last Rolling Hero will deliver you some enjoyment for the few hours it will take to complete. It’s as cheap as chips, comes with a basic premise, looks okay visually but is never ever groundbreaking. The camera in the cutscenes and some other little bits do seem a bit broken, but gameplay-wise it works fine. It isn’t that hard either and so you do have to ask what you want from a game that costs just under four quid.

The Last Rolling Hero is a cute robot who wants to save the universe. Would you like to help with that?