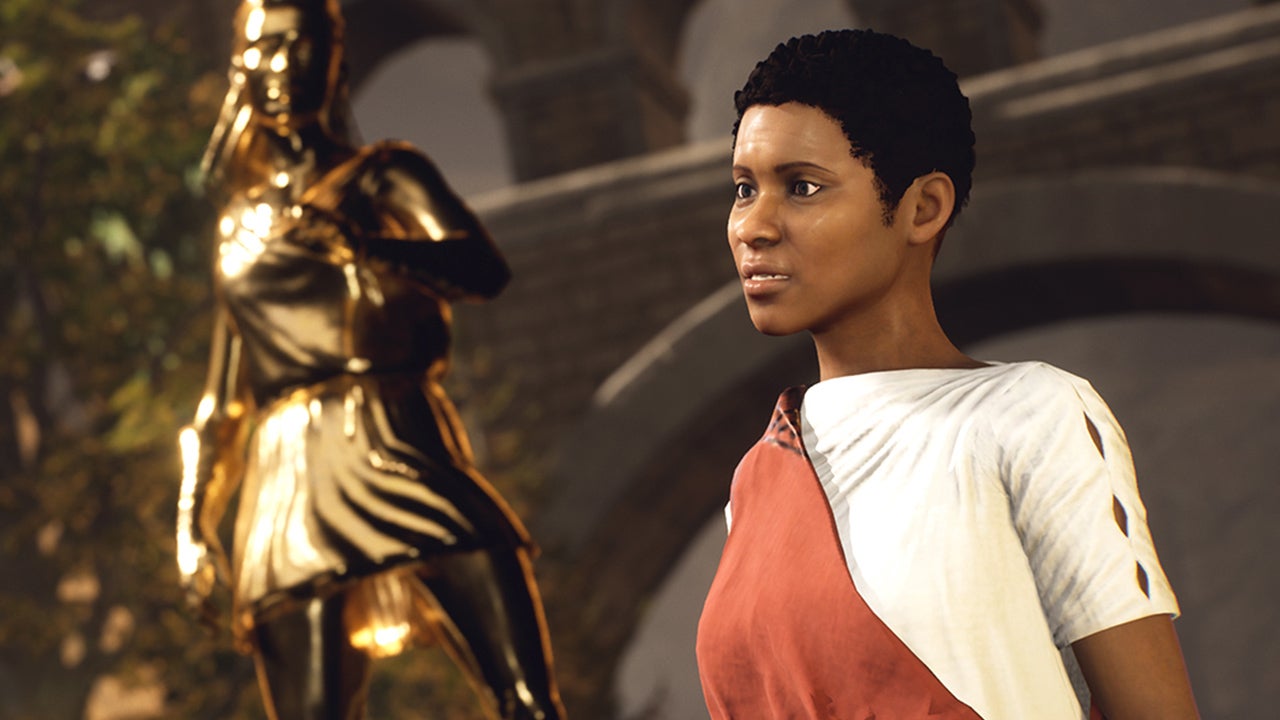 It’s an absolute triumph that a Skyrim mod could reach 3,000,000 downloads, let alone win a national award for the quality of its writing, but 2015 mod The Forgotten City did both. Six years later, this freshly remade standalone game from original developer Modern Storyteller reworks, refines, and greatly expands upon the same cleverly interconnected ensemble cast and morally provocative story of that already fantastic mod. Breaking away from the Elder Scrolls universe finally allows this terrific adventure to come into its own, with plenty of fresh twists, turns, and a heaping helping of self-aware dialogue that can leave your mouth ajar.

The Forgotten City begins as you wake up next to the Tiber River with a mysterious hooded figure. After creating your character, they send you into the nearby ruins in search of a stranger named Al, and the rest is Ancient Roman history. No longer set in Skyrim’s Dwemer ruins, this Forgotten City is instead a gorgeous Roman stronghold, complete with historically accurate structures and architecture, including Villas and a public Forum. It even has its very own Aqueducts that provide easy access across the city. It’s all a sight to behold, and the reimagined look and layout makes that true even if you’re a returning fan of the mod.

“The many shall suffer for the sins of the one.” This is the fabled Golden Rule that serves as the central focal point of The Forgotten City’s story, and it dictates that you and the city’s 23 or so residents can’t steal from or attack another human, lest the city’s guardian statues spring to life and methodically turn each citizen into solid gold – trapping them forever. But you don’t need constant combat to make it delightfully fascinating to unravel each of the city’s many delicate layers, and the deeper you go the more obvious it becomes that a life without clear crime is no utopia. The city’s least savory denizens use loopholes, social engineering, and deception to entrap and purposefully mislead one another, skirting the Golden Rule altogether. The Forgotten City is positively dripping with brain teasing moral quandaries as a result – without spoiling anything, there are points where you have to break the Golden Rule, as well as times where you must stop it from being broken, even if it would mean helping innocent people out of awful predicaments.

The absolute best part of The Forgotten City is its excellently written characters. Each person has their own motives, problems, and opinions of one another and of the Golden Rule itself to discover, with standouts like the conniving Aurelia being particularly fun to talk to. While I was initially a bit disappointed to see that there were no RPG systems to use during dialogue, especially after a game like Disco Elysium showed just how interesting they could be, the conversations are very engaging without the need to roll skill checks. Those things arguably wouldn’t even fit into what The Forgotten City is trying to do anyway, as its dialogue is tightly written and filled with mysteries to piece together, and your decisions carry more than enough weight as-is.

The absolute best part of The Forgotten City is its excellently written characters.

The only misstep with its characters is that their top notch dialogue occasionally suffers from facial animations that range from dubious to outright hilarious. Modern Storyteller says a fix might arrive for launch, but it wasn’t worked out in time for this review, leaving stiff performances from otherwise exquisitely well-written and decently-voiced NPCs.

It isn’t exactly the longest adventure either, about 10 hours if you want to see everything and reach the canon ending at a reasonable pace, but it absolutely had me wanting to follow every thread I could find. You can “beat” The Forgotten City early if you don’t want to do everything, but you’re really missing out on its most interesting bits by doing so. It’s practically begging you to tease these layers apart too, and all that intrigue is eventually paid off quite well.

In case you do turn all your suspects to gold, The Forgotten City makes genius use of a time loop mechanic to keep your investigation going smoothly. Every time you break the Golden Rule by, say, killing somebody or stealing an item, you must run back to the starting portal and begin the day anew. The world resets to its original state but you keep everything in your inventory, allowing tangible progress from day-to-day and leading to some interesting conversations, such as how you know a character is about to do something or how you have a certain item in your possession that you couldn’t possibly have without stealing it.

Retracing your steps each day might sound tedious, but another great touch is that you don’t need to redo every quest each time. You can conveniently send Galerius, the most well-meaning yet tragically impressionable man on the planet, to run off and do each of your previously completed quests for you, bringing you back up to speed every time you need to restart.

The world is designed to draw you in and keep you captivated.

The Forgotten City has some combat too, but it’s minuscule and quite simple overall. Granted, it isn’t really about action sequences, combat, or platforming – it has all that, but it’s only sprinkled in at appropriate times to improve the pace, and never outstays its welcome. Most of the time, you’ll be sussing out information through dialogue, exploration, and some pretty basic but enjoyable platforming. That last point usually involves shooting arrows from Apollo’s bow, which lets you turn organic material like ivy or algae into gold, providing a solid platform for climbing or launching yourself to the next point of interest.

No matter what you’re doing, it’s easy to get swept away by The Forgotten City’s incredibly detailed visuals – another obvious step up from its origins as a Skyrim mod. The whole layout of the world is designed to draw you in and keep you captivated from start to finish. The city itself is built on a mixture of Roman, Greek, Egyptian, and Sumerian architecture and you do meet people from each of these respective cultures as well. But even with the eye-catching environments, some of the most interesting parts of this world are the many smaller items that are decorative by nature, but can still be picked up and examined. Each one is labeled with interesting or educational tooltips, lore, and in-jokes that make every inch of The Forgotten City feel lived-in and real.

Beyond the visuals, transitioning to a standalone game has also allowed for the arrival of some welcome quality-of-life features. It’s got less bugs for one, but it also benefits from a much cleaner font and text style than Skyrim, as well as a wildly useful feature that lets you tap a key to automatically follow an NPC if they’re guiding you to a set location. Mimicking a trend among modern AAA games, there’s even a solid in-game photo mode that allows you to capture the sheer beauty of this remote city.